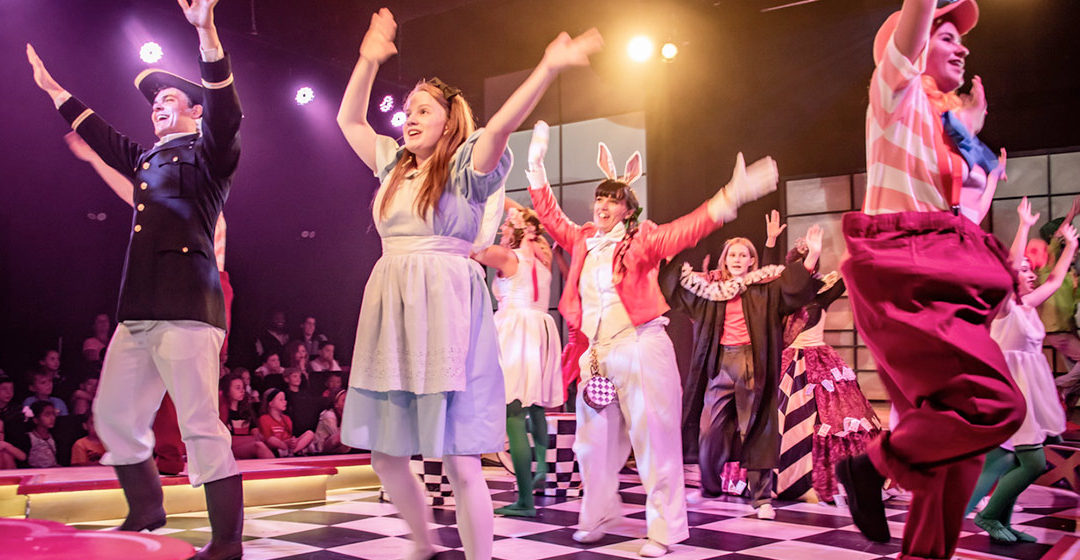 Thingamajig Theatre Company opened its 2019 production of Disney’s Alice in Wonderland JR. on Friday July 5, at the Pagosa Springs Center for the Arts. Featuring updated songs from Disney’s original motion picture, the production is a fast-paced, family-friendly take on the classic tale with a running time of about 50 minutes — the perfect length for a family theatre experience. According to legend, Charles Dodgson and his friend, the Rev. Robinson Duckworth, took a lengthy rowing excursion on the Thames River on a lovely day in 1862 — along with the three young daughters of Oxford University professor Henry Liddell — Alice, Lorina and Edith. During the trip, Dodgson helped pass the time by inventing a fanciful story wherein Alice followed a well-dressed white rabbit down a rabbit hole and into a strange underground adventure involving talking animals, mad tea parties, cookies that made one larger or smaller, and a queen with murderous tendencies.

Three years later, in 1865, Dodgson arranged the publication of 2,000 copies of Alice’s Adventures in Wonderland under his pen name, Lewis Carroll, with illustrations by noted English political cartoonist John Tenniel. The book was not immediately popular with critics, but eventually became one of the bestselling books in the English language, with dozens of modern film and TV adaptations, including the popular animated version by Walt Disney Studios, Alice in Wonderland. Disney had originally purchased the film rights in 1938, following the enormous success of Snow White, and had registered the movie’s title with the Motion Picture Association of America, but the film was not completed until 1951. Disney commissioned several top songwriters and over 30 potential songs were written; many of them were included in the film, some for only a few seconds — the greatest number of songs of any Disney film.

The production is directed and choreographed by Louisiana-based university instructor Pia Wyatt — one of Thingamajig’s favorite summer staff members — and features a blended cast of professional summer repertory actors working on stage with a half-dozen local Pagosa teens.

“Laura and Tim Moore have reached out to the local teens and invited them to perform side-by-side with the professional actors,” explains Ms. Wyatt. “It’s an amazing experience for the teens, and it’s an amazing experience for the professionals to be mentors and take these kids under their wings. We’ve seen some wonderful friendships blossom, and it’s given the professional company members to be role models, which is what we really are.” The mentoring has been especially helpful, says Ms. Wyatt, in developing the show’s choreography.

“Some of the teens have had limited dance training, and it’s been so great to watch the professional actors take them off in a corner and help them polish their dance moves.” Commenting on the design of the show, Ms. Wyatt praised the work of Thingamajig costume designer Lexi Saeger.

“Lexi has done a complete service to Lewis Carroll and to our collective image of ‘Alice.’ She asked me at the very beginning if I wanted her to go crazy and avant-garde, and I told her, no, I wanted the audience to see the the characters as if they had stepped right out of Carroll’s book. And that’s exactly what she’s done. The costumes are completely incredible.”

The rest of the design and technical crew are the same talented folks — Jill Fives, Matt McCarren, Laine Wong, Boni McIntyre, Brian Freeland and Michaela Pietrinferno — who have worked on the other ‘2019 Broadway in the Mountains’ summer repertory season at the Pagosa Springs Center for the Arts, which include Ring of Fire, Mamma Mia!, The Who’s Tommy, and Jekyll & Hyde, The Musical.