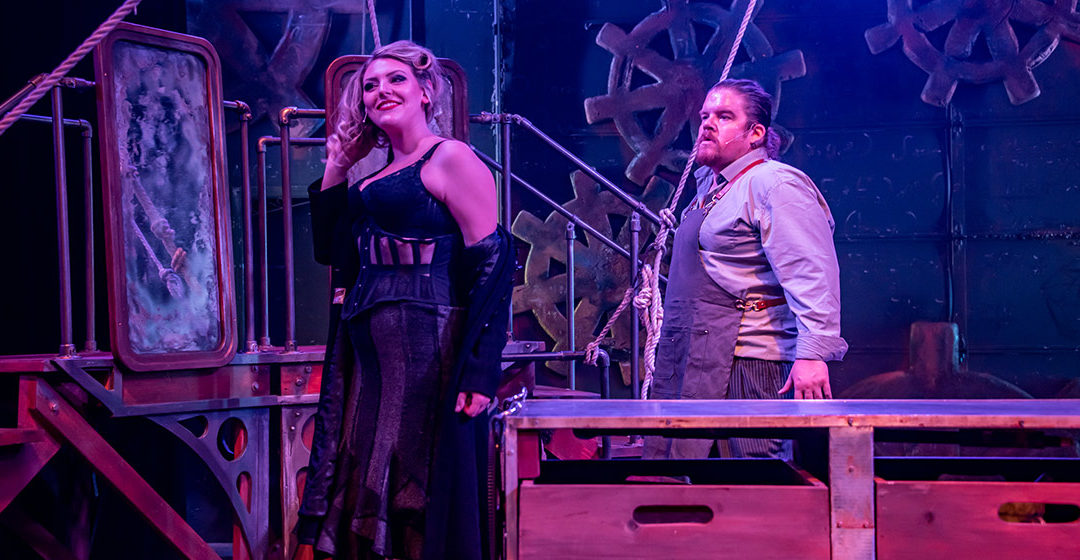 The Thingamajig Theatre’s professional production of Jekyll & Hyde, The Musical will open Friday June 28 at the Pagosa Springs Center for the Arts, under the guidance of three Thingamajig veterans: director Melissa Firlit, musical director Boni McIntyre, and choreographer Pia Wyatt. The production features Perry Davis Harper as Jekyll/Hyde, with Bailey Claffey and Samantha Luck as his conflicting romantic interests.

While writing his gothic novella, The Strange Case of Dr. Jekyll & Mr. Hyde in 1886, Robert Louis Stevenson probably had no idea that his character names would become a permanent fixture in the English language, along with a small selection of other mythical characters from 19th century English writers: Frankenstein, and Dracula. 130 years later, the basic outline of the story remains familiar. In Stevenson’s gothic tale, the good doctor develops a potion that brings about, within himself, a very distinct separation between the well-loved Dr. Jekyll and the universally-hated Mr. Hyde. During a break in the rehearsals this month, director Melissa Firlit spoke about her attraction to the musical version.

“I saw it on Broadway when I was in high school, and I was just so attracted to the music, and the emotional arch of it. It’s very grand, in the sense of a musical; it’s like an ode to an operatic world. Director Firlit noted that the play also deals with addiction. In the musical, Dr. Jekyll becomes addicted to the idea of solving a human mental health problem, and develops a chemical potion that he (mistakenly) believes will help him achieve his goal — a reflection on our societal problem of drug abuse.

“I think this is a world we are all familiar with, but we avert our gaze. We don’t want to look at it. Some of the issues the characters are dealing with are things we don’t want to pay attention to. The mental health issues. The problem of addiction. Our struggles with sensuality and sexuality. I think people want to live in a ‘black and white’ world, where good and evil are clearly defined. But the world isn’t that simple.

“Within Jekyll’s experiment, these are aspect of himself that were always there, right under the surface. And now he is giving himself permission to act on those impulses…”

That permission leads, ultimately, to murder. In adapting the gothic tale for the stage, lyricist Leslie Bricusse and composer Frank Wildhorn inserted a romantic conflict not present in Stevenson’s original story: two women vying for Jekyll/Hyde’s affection. The two women in Jekyll’s life are his fiancée Emma, played by Samantha Luck, and girl-of-the-night Lucy, performed by Bailey Claffey.

“Jekyll & Hyde is a story that we all sort of take for granted; we all know something about it. But I don’t think we’ve truly explored it. Many people I’ve run into around town have said, ‘Oh, I can’t wait to see it. I know the story but I don’t know the musical.’ The music has such a feeling of movement, and propels the story forward. The show feels epic, in many ways, just because of the music behind it…

“Jekyll & Hyde, The Musical” will take place in the Pagosa Springs Center for the Art’s Black Box Theatre located in the back of our theatre.