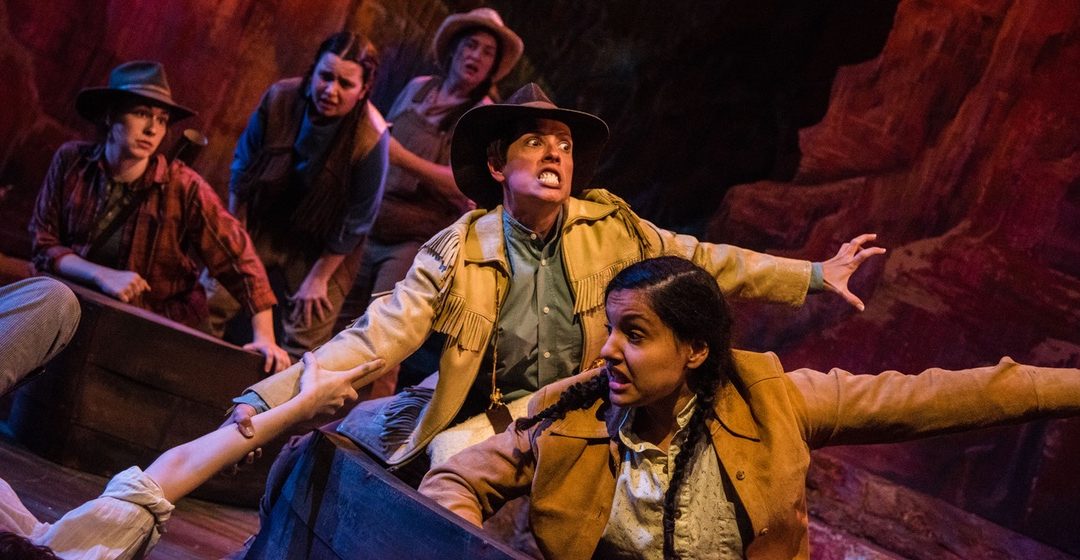 On May 24, 1869, American naturalist John Wesley Powell led a team of adventurers on a voyage down the Green and Colorado Rivers, including the first recorded passage of white men through the full length of the Grand Canyon.

The journey began in Wyoming and lasted three months, concluding at the confluence of the Colorado and Virgin rivers in present-day Nevada. The company included seasoned mountain men and war veterans that Powell had recruited on his way from Illinois to Wyoming.

A century-and-a-half later, in 2015, playwright Jaclyn Backhaus and director Will Davis brought Men on Boats to the stage for the Summerworks theatre festival in Toronto, Canada — a rather unusual version of the story, with a cast of ten women portraying John Wesley Powell and the nine masculine men who participated in the 1869 expedition.

This month, Thingamajig Theatre Company kicks off the 2019-2020 Winter Season by launching its own production of Backhaus’ Men on Boats at the Pagosa Springs Center for the Arts. The show, directed by Thingamajig veteran Melissa Firlit, opens on Friday, October 11 and plays through Sunday, October 27. “There’s a lot of movement in the play — especially when the boats are on the water — and that’s attractive to me as a director,” says Firlit. “And I’m also attracted to the chance to tell the audience an historical story…

“And parts of it are really funny.”

Backhaus based the play on Powell’s journal, so the situations are things that actually happened during the 1869 expedition.

Says Firlit, “This was the first government sponsored exploration of the Grand Canyon, and part of the irony is that the crew is constantly reminded that Native Americans had done this trip many times before.”

Each crew member has his reasons for making the trip, and those various reasons are not always compatible. Given the personality conflicts and the physical dangers, we find ourselves wondering how many of the original crew of ten will arrive finally at the Virgin River.

“The story of the expedition has traditionally been told by men,” offers Thingamajig Artistic Director Tim Moore. “And the playwright thought it would be interesting to tell the story with new voices. And that’s one of Melissa’s strengths as a director — she’s really great at tapping into the new voices in contemporary theatre. She’s the first person I thought of, to put together a piece like this.” Although the actors are all female, they portray the male adventurers in a straight-ahead fashion, which naturally lends itself to a sometimes humorous, sometimes delicate, twist on the historical story.

“It’s a fast-paced show,” says Firlit, “and it’s entertaining to watch women embody another gender, struggling with dire circumstances — life and death circumstances — during a very different period of America’s history, but speaking with contemporary voices… to explore the need to conquer…”

Men on Boats will take place in the Pagosa Springs Center for the Art’s Black Box Theatre located in the back of our theatre.