The Texas Homecoming Revolution of 1995 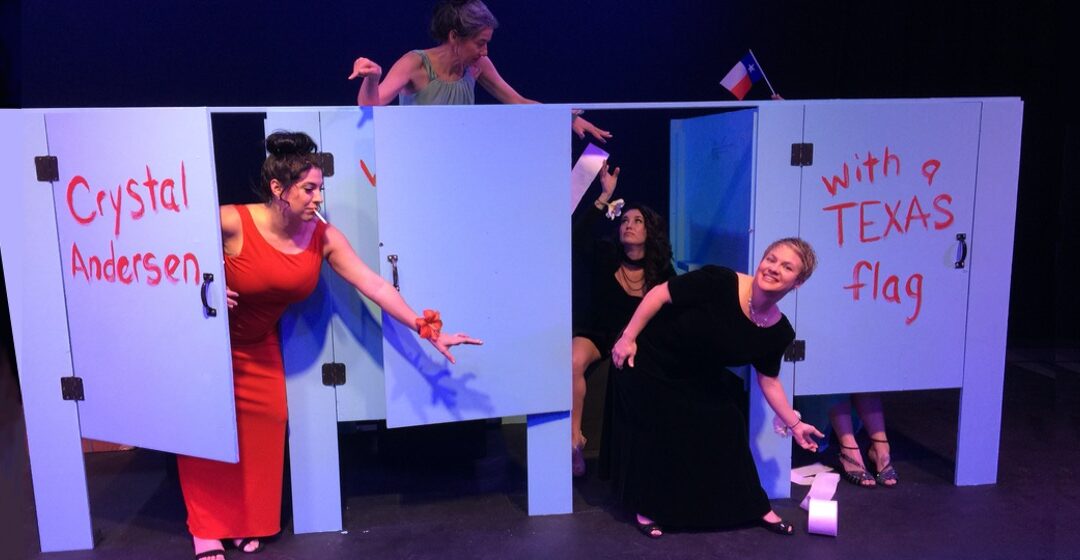 THE TEXAS HOMECOMING REVOLUTION OF 1995
By Jennifer Faletto

It’s the Friday before Homecoming in a suburban high school and a scandal emerges. Crystal Anderson has allegedly committed an unspeakable act with the Texas state flag. In a culture where legacy and tradition often go unquestioned, one student changes the consciousness of her community. This hilarious script, from Thingamajig’s 2018 Playwrights Festival, will take the audience for a laugh-out-loud visit to the stalls of the girls’ restroom in a Texas high school… where all the secrets unfold.

TAMMY: What are you talking about? It’s like Christmas morning…

JESS: It’s so good it’s like Christmas and your birthday on the same day.

JESS: No, Sammy, it’s not like if you were Jesus.

SAMMY: Well… if Christmas and your birthday were the same day…?

So begins the Thingamajig Theatre production of “The Texas Homecoming Revolution of 1995” by playwright Jennifer Faletto, currently in rehearsal at the Pagosa Springs Center for the Arts as the final offering of the 2019-2020 Winter Season.

Thingamajig just wrapped up its wonderful holiday musical, ‘A Grand Night for Singing’ on January 12, which followed on the heels of an original and festive Christmas production entitled ‘A Very Perry Christmas.’

For the last several years, Tim and Laura Moore — Artistic Director and Executive Director for Thingamajig Theatre Company — have been staging a comedy with local actors as the finale for the Winter Season, presented as a staged reading. Previous productions have included Eve Enseler’s ‘The Good Body’ and two original comedies by Pagosa playwright Karl Isberg.

This year’s offering by Jennifer Faletto was workshopped during Thingamajig’s annual Playwrights Festival in 2018, and the Moores have decided to present a more fully produced version this winter as a staged reading. The cast — all local actors — includes Ericka Vincent as Sammy, Jackie Kleckner as Jess, Nadia Werby as Tammy, Lisa Jensen as Abby and Haleigh Sowerby as Crystal.

The Texas Homecoming Revolution of 1995 will take place in the Pagosa Springs Center for the Art’s Black Box Theatre located in the back of our theatre.